A Gift to the Town

The history of the Recreation Ground starts properly in 1901 when Francis Greg died and left the Cricket Ground, as it then was, to the people of Bollington to be administered by Bollington Urban District Council. It was one of a long line of services to the Town provided by the Greg family, starting when Samuel Greg junior bought Lowerhouse Mill from the Philip Antrobus estate in 1832 and improved the lot of the mill workers up to 1846. Francis Greg was his nephew living at Samuel’s original home, Turner Heath, a large red brick house still in existence on the Bollington road as you enter the town.

Francis Greg had been a strong supporter of cricket in Bollington. The club based on Gnat Hole, as his ground was then known, had started about 1885 by bringing together smaller clubs in Shrigley Vale and Bollington Cross. Francis generously provided a pavilion, a bandstand and paid £20 for a roller to make sure the summer wickets were properly prepared. The Bollington Cricket Club were mindful of their good fortune and encouraged other activities.
From 1896 the Club organised an Annual Athletics Meet every Whitsun which grew in importance as a money spinner for the Club and by the early 20th Century gained the reputation for being one of the best amateur sports gatherings in the North of England.

The change in status to a public recreation ground in 1901 caused a great deal of controversy at the time because footballers naturally wished to use the ground during the winter months. Traditionally the famous Bollington St. John’s Team based on the congregation of St. John’s Church had used the eastern end of the Cricket Field during the winter months but this came to an end in 1901. For many years the Cricket Club prevailed and footballers were excluded due to the political influence of the cricketers on the Urban District Council. The Urban District Council built a bowling green beyond Francis Greg’s Bandstand where the footballers traditionally played. In addition in 1908-09 they built a new entrance on Palmerston Street with a memorial plaque in honour of Francis Greg. The current plaque is a replacement made in the 1990’s.

One important though unplanned contribution the Recreation Ground made to the life of the Town in the early 1900’s was that of drawing attention to the foul state of the River Dean. Early photographs and maps remind us that the eastern end of the Recreation Ground has a complex drainage system which still challenges users today. The River then wandered into the far corner of the Recreation Ground and curled over what is now the Football Pitch before taking a sedate path alongside the Cricket Pitch and leaving under the Adlington Road Bridge in the south western corner. In addition a mill leat flowed straight down the southern edge of the ground. Francis Grafton, an unacknowledged benefactor who lived at the large stone house known as Barley Grange near the entrance to Flash Lane, provided two rustic bridges in 1908. One crossed the mill leat and another crossed the River Dean. The leat has long been filled in and covered by a pathway. The rustic bridge was washed away in a flood in 1933 and has been replaced by a handsome metal structure. This has recently been renewed and repainted.

By the 1890’s when Gnat Hole entered wide public use over 300 cess pits drained directly into the River Dean. Complaints flooded into the Health Authority and then the Bollington Urban District Council from people using the Recreation Ground. The stench was awful and visible faecal matter clogged the River. An inspection eventually occurred in 1899 and the then Medical Officer of Health declared the river ‘nothing but an open sewer’. The Council still refused to raise the money necessary for a pure water supply and a proper sewage works. It required two prosecutions to force their hand and the sewage works was opened in 1906 much to the relief of all those who enjoyed the use of the Recreation Ground.

Cricket has always been the dominant use of the recreation ground for sport.  In 1905 the Macclesfield Courier carried the report of an astonished journalist: ‘Fancy a village of 6000 challenging and playing a city like Manchester with a population of over 60 times that.’  When the Cheshire County Cricket Club was formed in 1908 a number of County matches were playing on Bollington Recreation Ground.
Big local industrialists like E.L.Oliver of Waterhouse Mill fame, and G.H.Swindells who owned the Clarence and Adelphi Mills were strong supporters. They supported the creation of a Workshops Competition but in spite of this strong local interest the Club’s prominence on the County scene declined.
Many years of rivalry between Macclesfield and Bollington started in 1883 when Macclesfield sent a second team at the Barnaby holiday with only five players, and despite being lent six substitutes lost by 83 to 66. The Clubs remained keen rivals for many years and after Macclesfield won by 151 to 40 at Bollington in 1890; they did not win again until 1900 and did not beat Bollington at Macclesfield’s ground until 1908. Crowds of up to 5000 are reported for some of these Derby matches.
The Recreation Ground Committee of BUDC charged Bollington Cricket Club £85 in 1956 for the preparation of match and practice wickets. Bollington Cricket Club Secretary Mr. A.A. Arnold in April 1958 at their Annual Meeting described the clubs achievements on the Recreation Ground. The Pakistan Eaglets were going to visit. A new Tea Pavilion had been opened and the club’s Second Eleven won the Second division Championship. When the Pakistan team visited in August 1958 Mohamad Ramzan, their captain, scored 66 in record time. September brought success to the First Team; they were champions of the Lancashire and Cheshire Cricket League and winners of the Saville Whittle Trophy. Prize money of £45 was spent on commemorative tankards for the players. In November the Council turned down the Cricket Club’s request to have a Sunday match.
The Recreation Ground has been host to many famous cricketers. The Australian Test Player Keith Stackpole (43 Tests 7 centuries) visited with Ramsbottom Cricket Club in a friendly match in the late 1960’s. Frank Hayes, who scored a maiden Test century against the West Indies in 1973, visited Bollington Recreation Ground many times with Marple Cricket Club.

By the early 1970s the club felt they had outgrown the tea pavilion and set about building a new structure set back on a higher level overlooking the ground. It was a wooden clad structure and became known as the “log cabin” It was in regular use, not only by the cricketers themselves but by the youth club for a meeting place and discos. The construction materials may have been an error in hindsight, as the building was relatively short lived and burnt down in 1980. The cricket team once again had to use the original pavilion (where the toilet block now stands) whilst it wrangled with Macclesfield Borough Council to get a replacement built. The Council had access issues with the site of the burnt out building and eventually settled on a new build pavilion on an area of allotment land. This is the current building and car park, opened in 1984. The base for the log cabin can still be seen if you battle among the self sown trees and brambles next to the Vale Inn beer garden.
Cricket is still one of the strongest elements in the sporting life of Bollington. The Bollington Cricket Club has competed in the Cheshire County League since 2002. As the Chairman says ’we rub shoulders with clubs from Towns with much larger populations as well as wealthy clubs with “no expense spared” facilities. The people of Bollington can be rightfully proud that this town produces such a competitive standard of cricket’.

Bowls were a central feature of works life up to World War II and after. The local mills in Bollington had very enthusiastic teams organised through Fine Spinners and Doublers Limited into 7 groups. Olivers (Waterhouse Mill) was in Stockport 1, Clarence and Adelphi were in Stockport II. In 1946 The Bollington Club secretary proudly recorded that the finals of the Lee Team Trophy and the Howarth Individual Trophy were for the first time held at the green on Bollington Recreation Ground. With the Clarence Mill Team reaching the semi-finals of the Lee Trophy and H. Archer of Olivers being beaten
in the Final of the Howarth Trophy. The session was reportedly spoilt by the weather The Secretary ended his report by wishing that the many Directors who were present and who showed such an interest in the game would deign to play a match against their employees. ‘The game would be very popular’.

It wasn’t until 1913 that the banished St John’s footballers, soon to become Bollington United, successfully petitioned the Council to provide a football ground. The Council was now more sympathetic but the footballers had to wait until after 1918 when the River could at last be diverted to its present course to provide space for their pitch. A newspaper from the time asked for volunteers to help with the required levelling of hollows and setting back the course of the book which was going to cost £300 to avoid a “fourpenny rate” to raise the money.

A Coronation and Two World Wars

As well as being a sporting venue throughout its history, the Recreation Ground has played a central role in the life of the Town. The earliest public celebrations were those to welcome the Coronation of King Edward VII. in 1902 and King George V in1911. 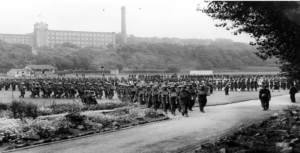 There are photographs showing huge crowds dressed in their Sunday best with men in three piece suits and women in long dresses and splendid hats crowding the grounds.

During the First World War the Recreation Ground was used as a parade ground and during the Second World War part of it was dug over and planted as part of the Dig for Victory Campaign as well as being used to train the Home Guard.

Carnival Time in the 1950’s saw the Carnival Queen in regal dress with her train being held out of the mud parading in lonely splendour across the Recreation Ground, watched by huge crowds. In 1955 the 16 year old Doreen Bamford was chosen to represent Bollington. Doreen went on to be chosen as the National Carnival Association’s Beauty Queen for that year after an embarrassing incident that hit the national press when Miss Nantwich was awarded the crown by mistake.

In 1964 the Recreation Ground hosted a new development that has become a central feature in the community life of Bollington people. This was the brainchild of Father Derek Smith the curate at St. Oswald’s Church and it was quickly taken up by Drs. John and Jean Coope and the historian of Bollington, Margaret Ingram.
The Festival was to start with a Carnival Parade and then there would be a series of events planned on the Recreation Ground. Jim Renton arranged for the big tent for that first festival to be erected. Bollington weather intervened and after a few days of heavy rain the tent collapsed on top of a festival feast!! Luckily volunteers were quickly found to put all back to rights and the WRVS led by Binkie Renton and Ida Kershaw set up a field kitchen and brazier to provide the feast.

Thanks go to Councillor Ken Edwards for the majority of this information.

“Looking Back at Bollington” George Longden and Molly Spink
The Happy Valley Web site, The Civic Society, The Discovery Centre.