A Gallop through Bollington’s History 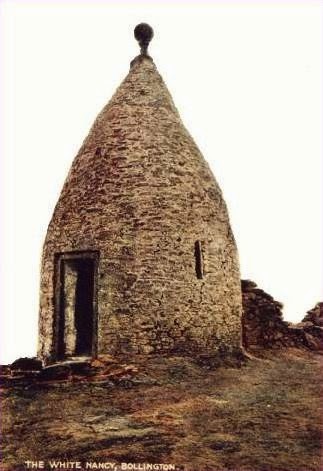 For many thousands of years Bollington was blessed with no history at all being an obscure part of the Parish of Prestbury. Exciting and imaginative stories can be created about Archers at Agincourt and wild hunts through the Forest of Macclesfield or visits from the Black Prince. However until the 17th century our little valley with its River Dean, fed by Harrop Brook, running through rocky bank, marsh and open fields saw the common activities of rural England: sheep farming, domestic farm activities, wood cutting, charcoal burning, and some stone cutting and surface coal mining.

The only outsiders were itinerant traders in salt, coal and peddlers wares using ancient trackways dating from Roman times hard now to define. The best attested is the one leading up Hedge Lane in Harrop Valley and out over the Hill to Kettleshulme and beyond. There is another that possibly came into Bollington up Clarke Lane and the Redway and up the East side of Kerridge to Rainow and beyond. Itinerant preachers probably stopped at Bollington Cross on their way to the North. The Cross has been seen in living memory but now has disappeared and we are not sure where it was placed.

The earliest buildings to survive are all connected with day to day agricultural living; the farmhouse which is now the Drop-In Centre, the white house next to the co-op with the plaque with its remnants from the Tudor period and the low set house opposite the new flats in Palmerston Street all have their origins in the early post-middle ages.

With the gradual clearances of the woodland and the extension of arable and sheep farming over the centuries a pattern of farm ownership grew up based on local large land owners. By the 17th century farms such as Old Hollin Hall at the top of Hurst Lane and Stake End Farm on Chancery Lane, Ovenhouse Farm on Henshall Road and the farms in the Dean Valley above Ingersley Vale were all settled and thriving.

By the end of the 17th century Bollington was still a series of farms with possibly a concentration of buildings at Bollington Cross. Some ordinary cottages here have early remnants in their interiors.The Great Civil War 1642-46 passed us by. There was a skirmish at Adlington in 1643 between Manchester Parliamentarians and Royalists. The Roundheads lost but soon after Cheshire was held for Parliament and retained in spite of the incursions of Prince Rupert in 1644.

With the rise of the silk industry in the Macclesfield area in the 18th century the picture of rural peace was shattered by the beginnings of the mighty changes that were to bring to birth in the 19th century the exciting industrial community whose architecture surrounds us today. It is difficult to believe that Bollington’s agricultural workers and quarry workers families were not involved in the making of silk buttons throughout the 18th century as this was a major village activity based on the merchants of Macclesfield.

What is clear is that during the later part of the century many water mills began to appear in Bollington and Rainow. The Adlington Estate made a complaint to the Court of Chancery in 1805 that these numerous mills were taking all their water. But the industry that changed the face of the town was the cotton industry and the people who changed the face of the town were the great cotton manufacturing families such as the Swindells and the Gregs. The end of the Naploeonic wars had brought about an industrial slump in the north of England. Then the beginnings of free trade after an Act of 1826 brought about another slump. In the early 1830’s business began to revive and we see a spate of activitiy in the Town.

Lowerhouse Mill built in 1818 by the Antrobus family and never used was bought by Samuel Greg and opened as a cotton mill in 1832. Samuel Greg was a social pioneer who created a model industrial community from 1832 to 1846, that became known as Goldenthal or Happy Valley. It was the fate of his community that we think inspired the industrial novels of Elizabeth Gaskell, Mary Barton and North and South.

It was the Swindells family who dominated the cotton town. They occupied or owned with various partners Ingersley Vale Mill (now ruined) and Rainow Mill from 1821 to 1841, Higher and Lower Mills (disappeared) from 1832 until 1859 and Waterhouse Mill (fragments left on Kay-Metzeler site), in partnership with Thomas Oliver from around 1832 until 1841.

The Swindells family made their lasting contribution to the Town’s architecture when, with partners the Brooke family, they built Clarence Mill in 1834-38 and the Adelphi Mill in 1856 taking full advantage of the newly opened Macclesfield Canal in 1831 whose stone architecture bridges, aqueducts and quays were designed and built by William Crossley for the main contractor Thomas Telford. These magnificent industrial buildings are still with us, albeit metamorphosed by prescient developers into flats and business units. The original owners brought raw cotton in through Liverpool from the U.S. and exported it to the world through agents in Manchester. They were the leaders of a globalised industry. There are Swindells monuments in St. John’s graveyard including a moving memorial to the wife of Martin Swindells.

It was the wealth of the cotton industry that created the mills and cottages of upper Bollington and some of the splendid family homes such as the Swindells family residence, now The Medical Centre and a private residence. The Medical Centre has two wonderful sculptures by Alfred Gatley, Bollington’s famous 19th sculptor.

It was the crises in the cotton industry that brought hardship and uncertainty into the lives of our townspeople in the nineteenth century. There are the graves of young children in the St. John’s churchyard who suffered and died due to poor public health provision and lack of medical care that accompanied the growth of private wealth. Outbreaks of cholera were not unknown.

The remaining distinctive characteristics of the town were created by the 19th century transport revolution. The first canal into Macclesfield was proposed by the Brocklehurst family in the 1760’s. The great Duke of Bridgewater put a stop to that, wanting to maintain his monopoly on water transport. Thus the development on the area was held back for 70 years. When the Macclesfield Canal linking Marple to the Trent and Mersey was built cotton, coal and stone could be more easily transported and a railway was constructed from the Endon quarries to the canal side at Kerridge as well as the great mills being built. The soaring aqueduct over Palmerston Street and its lesser brother over Grimshaw Lane are testimony to the engineering skills of the 19th century.

Arrival of the railway

The railway took some time to come to Bollington and lasted a century from 1870 to 1970. It is now the Middlewood Way cycle and walking track and the station and siding is the Clough Bank transport and industry park. The business units on Grimshaw Lane replace a stonemasons yard.

As we have said for much of its history Bollington has had a corporate identity as part of the Parish of Prestbury but in the 19th century the Town grew so populous it was decided it needed its own Parish in 1834. The Methodists had built the first church in 1807 followed by the present handsome church and manse opposite the Town Hall. The Anglicans and Catholics followed in 1834 with the church of St. John’s and the first St. Gregory’s Church (disappeared) built on land at the top of the village in Church Street given by Sir William Turner. The present St. Gregory’s is a handsome brick built building next to the viaduct on Wellington Road. St. John’s Church was closed in 2003 and Anglicans worship at Holy Trinity in Kerridge and at St. Oswald’s at Bollington Cross next to the Church of England Primary School.

There was a primitive Methodist church in High Street on the right facing up the hill now disappeared and replaced by houses. The Congregational Church opposite the Drop-In Centre has been cut in half and turned into offices and a close of houses built.

In the 20th century Bollington avoided war damage in the physical sense. However Bollington experienced a long slow decline in the textile industry, coupled with the rise of private transport and out of town shopping gradually drained work and commercial activity from the Town.

Nevertheless, Bollington Urban District Council had a proud history of providing community facilities such as piped water and gas and the corporate life of the Mills and Churches supplied ample excitement in fetes, parades, sporting events and away days in Wakes Weeks. New houses were built of stone in the 1930’s and brick in the 1950’s.

However, from the 1990’s onwards Bollington has enjoyed a renewal of life based on its picturesque position on the edge of the Pennines surrounded by green belt, but in easy reach of good employment centres like Astra Zeneca, Manchester Airport and large urban areas like Stockport and Manchester. There has been a continuous inflow of people and the ever present estate agent's boards are evidence of continuing mobility.

The Civic Society has masterminded the creation of the Bollington Discovery Centre which is dedicated to informing the people of the Town as well as our visitors of the complex history of this small but vibrant community.

The Town enjoyed independent Civic Status from 1894 until 1972 as the Bollington Urban District Council. We hope to see its Civic spirit continue as Bollington Town Council works to build a better future for a strong and safe community through the implementation of the Parish Plan adopted in 2004. In doing so the Town Council is pledged to work with all the groups in the community to ensure that the 21st century like the 19th is one of enterprise, energy and hope for the people of Bollington.

For lots of photographs of old Bollington click on any of the Archive Image below.

Submit your views and comments, we’d love to hear from you!

Read about Bollington’s interesting history and uncover our heritage.

Read about the latest developments in the Bollington community.

Need a telephone number? Want to know where we are on the map?