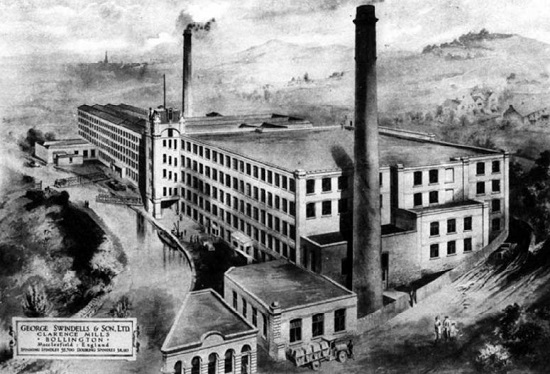 The industrial development of the Town occurred between about 1760 and 1950 and the history has been thoroughly researched by Bollington Civic Society. You can visit the Happy Valley Website for a very detailed history.

Although our industrial heritage includes quarrying and mining we are probably best known for our cotton spinning, weaving and printing. Bollington only exists as a town today because the valley was a good place to build, power and operate cotton mills.

Here is a brief summary of our best known mills.

Waterhouse Mill was built in the late 1780s.  Lomas married a daughter of the Oliver family and the business became Olivers. The mill was burnt down around 1800 and rebuilt to become the premier fine cotton mill in the world. It is now a housing development (Waterhouse Mill estate accessed by Waterwheel Way)

Lower mill (not to be confused with Lowerhouse mill) was built in 1792 by George Antrobus as a mill for processing cotton. The mill was bought by Henry & Leigh Slater in 1875 who converted it to paper coating. It is now Tullis Russell and continues to operate as a specialist paper processing mill. It sits between Palmerston Street and Church Street/Lord Street.

The original four story mill was built in 1789/90 by George Antrobus and passed on his death in 1820 to his son Philip Antrobus, who had at that date just completed building Lowerhouse mill. A second, three story, mill was built at right angles to the first in 1830. In 1832 the mill was leased to Messrs Swindells and Oliver, each of whom also had other mills in Bollington. On the 1871 map these mills are shown as Upper mill. In later years it became among other things a brewery before Shrigley Dyers took over the site for bleaching and dyeing in 1936. The site was demolished in the 1990s and is now housing at Dyers Close.

Lowerhouse mill was built in 1818/19 by Philip Antrobus. It is not clear whether the mill was used by Antrobus before his early death in December 1829. The mill was taken over in 1832 by Samuel Greg junior who used it for cotton spinning. Due to its isolated position Antrobus built housing for his workforce. Subsequently Greg provided gardens, allotments, a school, a library and evening classes for his workers to learn how to grow vegetables, how to feed themselves properly and care for their health. Greg called it ‘Goldenthal’ – Happy Valley. Today the term is applied to the whole of Bollington, but it originally applied only to Lowerhouse! Lowerhouse Mill, which dominates the bottom of Albert Road is still in use by Slater Harrison who produce coated paper.

With the arrival of steam power industry could move away from rivers and Clarence Mill was built by Joseph Brooke and Martin Swindells I, who were already renting other mills in the town, right on the canal side to take advantage of this means of transport. The first phase of the mill was erected between 1834 and 1838. It was further extended in 1841 and 1857 before the first phase of the building was demolished in 1877 and replaced with what can still be seen today. After Joseph Brooke retired, the Brooke family dropped out of the partnership and the enterprise was continued by the brothers Martin II and George Swindells. Clarence Mill currently has mixed business and residential use.

Martin II and George Swindells built the Adelphi Mill which opened for business in 1856. The mill was built to spin cotton, there was no weaving. In 1898 it was amalgamated with other Bollington mills to become a part of the Fine Spinners & Doublers Association Ltd. It finally closed in 1970 and currently houses a number of business. It sits right alongside the Canal Towpath and can be accessed from Grimshaw Lane.

There were many more mills in the early industrial development of the Town. You can find a wealth of information about these and much more of the history of our Town by visiting the Happy Valley Website.